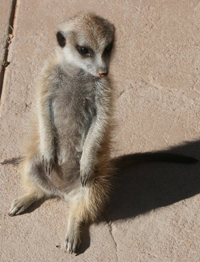 Poppet was found in an Upington suburb in October 2009, a tiny waif only about 5 weeks old. Once she was brought to Kalahari Trails and fed a natural diet of insects, she bloomed and soon became a great favourite with visitors; posing for photos, asking to be petted, climbing on their shoulders and accompanying them when I took them on walks and game drives.

She met Fizzle, the male I had raised the previous year and who had left to 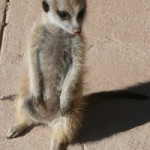 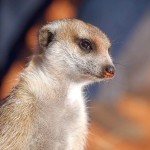 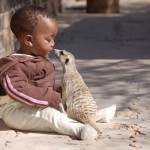 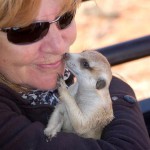 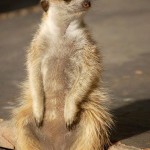 found his own family, at Xmas on one of his return visits. To my horror, she trotted off into the veldt after him when he left again on New Year’s Day. She was far too young to survive by herself but she returned, badly mauled, 5 days later. Her front leg was broken and she was covered in bites. From then on, she panicked and hid if she saw a wild group and I am sure it was one of these that had attacked her.

Poppet was a fanatical digger and she spent all summer excavating the abandoned Ground Squirrel burrow complex behind my house. When the evenings got colder, she stopped sleeping in my bed and slept in ‘her’ burrows which had been recolonised by both the Ground squirrels and a Yellow mongoose family.

Late in August she became distinctly rotund and her nipples elongated. Somehow, Poppet had got pregnant, probably by one of the solitary males that skirt the fringes of group home ranges.

On October 9th, swollen like a balloon, she vanished into her burrows and didn’t emerge until 5 days later. I hardly recognised my friendly Poppet in the vicious, starving virago that rushed at me and bit me badly. For the next 3 weeks she spent all her time in the burrow, only coming out to eat. Then, one evening, her babies emerged for the first time: four little grey bundles, their eyes hardly open but tails high, tottered along close beside her.

Tragedy struck in late November; a renegade Yellow mongoose male immigrated and started stalking the babies. After killing and eating two and biting a third badly, it was the last straw for Poppet when a Puffadder moved into her burrows. She and the two surviving youngsters fled to a burrow system nearly 500m away over scrub and open ground. They came back for food on the first evening but there was no sign of them on the second. On the morning of the third day, the babies came back alone, frantic and starving. Something had happened to Poppet and the answer came that same afternoon. One of our resident Tawny Eagles quartered the ground around the far burrow for hours and, since these birds return to where they have been successful, Poppet had very likely ended up as the eagle’s prey.

The two babies were much too young at 2 months to survive on their own and I fed and protected them from predators as well as I could. Then, on Xmas Day, the large wild group with young of its own arrived at Poppet’s burrows, probably attracted by the babies’ calls and odour. They met and greeted the youngsters excitedly and the two then went off with them when the group moved on.

So, even though Poppet didn’t manage to break her tie to humans, her babies did and they, at least, are now where meerkats belong – back in the wild!