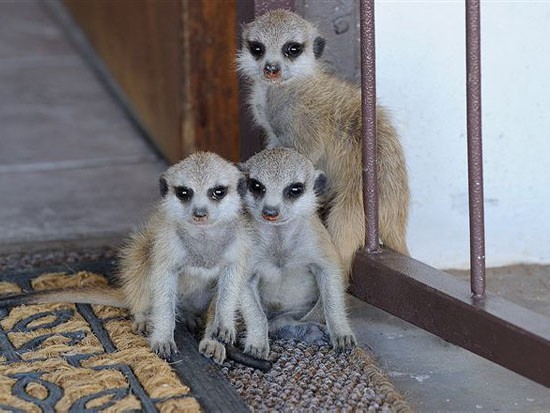 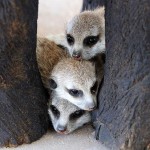 During the next few days they went exploring with Poppet, usually in the evenings and were already digging little scratches in the sand. Their personalities started to emerge. The little one who didn`t leave the burrow on the first day I called Twiggy because she was so thin. The one with the tip of its tail missing was the cutest and would look me straight in the eye. She was also the runt of the litter but, despite this, by far the most active and curious of them all. I called her Titch and she was my favourite. The largest and pushiest was a male I called Rambo but despite being pushy, he was a sunny and friendly personality. The fourth one, also a male, I called Hannibal, after Hannibal Lecter. Although I have worked with and raised mongooses of different species for decades, he was by far the nastiest one I have ever encountered. He beat up his siblings at any opportunity and monopolized Poppet to the extent that little Twiggy wasn`t even allowed to nurse any more. He would throw himself across Poppet`s stomach and prevent Twiggy from reaching a nipple.

I was very worried about Twiggy`s chances of survival. I tried to catch her to care for her and give her special food but Poppet wouldn`t let me touch her and bit me badly when I tried to pick her up. The end result was that Twiggy got so weak, she always trailed the others when they went foraging with Poppet and then, one morning, she just didn`t emerge from the burrows with the rest of them and must have died inside it overnight or was too weak to come out by herself.

During the following week, an adult male Yellow mongoose moved into the area and started stalking the babies. I saw him once at the edge of the burrow system, his eyes fixed on little Titch and moving towards her stealthily. She met his eyes, froze and then ran to her mother and I chased the Yellow mongoose away. This stalking of Titch, why her I don`t know, became a daily occurrence. Poppet remained blithely indifferent to it and I had to be on the lookout to chase the Yellow mongoose off as soon as he appeared. He struck one afternoon while I was answering the telephone and the babies were playing just outside my house. By the time I`d finished my call, Titch was gone and I glimpsed the Yellow mongoose disappearing down a burrow with something in its mouth. I chased after him but it was too late, little Titch was gone Hannibal then completely monopolized Poppet and chased poor Rambo away viciously every time he came near her. Rambo would then crouch and freeze for up to half a minute before becoming active again, a very curious response that I couldn`t explain. I could see now why meerkats need more than one babysitter. Each baby must have its own adult to accompany and adults don`t get shared between offspring, as is the case with Dwarf mongooses.

The Yellow mongoose struck again about a week later. Poppet had taken the two boys to forage near the campsite. I saw the three of them dashing back to the burrow, Hannibal covered in blood. The Yellow mongoose had bitten him in the neck and he was bleeding badly. He just sat on his hindlegs at the burrow entrance, looking completely stunned. Rambo was also covered in blood but it turned out to be Hannibal`s, smeared on him while he was trying to cuddle up to his brother. I thought this would be the end of Hannibal too but next morning he was a chirpy as ever, with a scar on his neck but no other damage that I could see. This experience didn`t change him though, he was just as aggressive towards Rambo as before.

The next day I saw the track of a puffadder going into Poppet`s burrows and she moved the babies to a new burrow quite far away across relatively open ground. She came back the following evening for food and left for the new burrows just before sunset. She was back again the next day with the babies, as before, but the following day, there was no sign of her. A day after that, the two babies came rushing into my house, alone and terribly upset and almost starving. I gave them the grasshoppers and moths I had caught for Poppet but as soon as they`d eaten, they were off again, Hannibal in the lead. I followed them and tried to entice them back to the house. During all this, the female of our breeding pair of Tawny Eagles was circling around above the burrow where Poppet had taken the babies and I realized then what must have happened to her. She had ended up as food for the Tawny Eagle`s chick.

By this time, it was almost dark and I had managed to get the babies into the house for protection. As soon as I closed the door, the two babies went berserk, rushing back and forth giving distress calls until I finally opened it and they ran out in the dark. I took a flashlight and went with them to the burrows, where they obviously wanted to go, still not sure if the puffadder was there or not and hoping not. The next morning, they were both back and hungry, so I made them some food. Hannibal, the little horror, tried to monopolise both food dishes so I had to put them far apart for poor Rambo to get anything. I tried to feed Rambo by hand with mealworms and bits of chicken but Hannibal would push him away and, instead of taking the food, would bite me in the fingers instead. He was a truly nasty little mongoose.

Things continued like this, me feeding the babies, going out with them to dig and chasing off the marauding Yellow mongoose male, until Christmas Day when one of the wild groups of 12 adults with 3 small babies about 5 weeks old turned up at Poppet`s burrows. Hannibal headed off towards them at a gallop, followed by Rambo and, to my amazement, instead of being attacked as I had expected, they were greeted excitedly by the adults and thoroughly sniffed all over. Then the whole group stood and stared at me, an enemy, and finally moved off, the two boys in tow.

It was six weeks later that the wild group came up to the house again and, to my delight, Rambo and Hannibal were still with them and looking in good condition. I could distinguish them from the group`s own three babies because these were smaller. The two boys ignored me completely although I called to them, and set off with the group across the vlei when it moved on.

About 3 months after that the group turned up once more. They had lost one of their own youngsters but Hannibal and Rambo were still there, now almost full grown and I realized that, the next time the group came my way, the boys would be adults and I wouldn`t be able to tell them apart from the adult group members.

So, although Poppet didn`t survive, her story did have a happy ending. Her two sons did and are now back in the wild where meerkats belong.